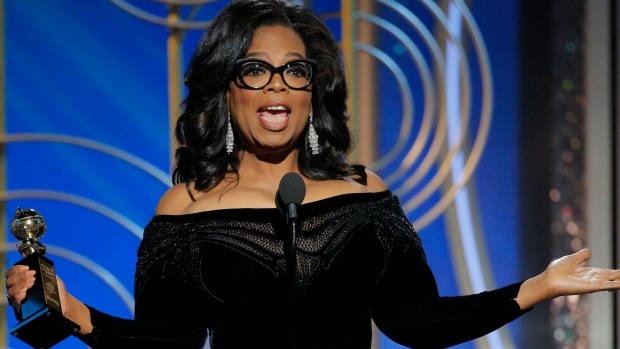 Last week Oprah Winfrey became the first African-American woman to receive the Cecil B DeMille Award for outstanding contribution to the world of entertainment at the Golden Globes. She used this opportunity to deliver a rousing presentation that was personal, emotional and had a strong call to action.

Here are 5 pointers from her presentation for you to try

Don’t be boring! Most people start their thank you speeches in a clichéd fashion: “Before I begin I would like to thank…”

Start with a Grab. A grab can be a startling statistic, a quote, picture or story.

Once the applause died down Oprah jumped in with a personal story that engaged and enticed us: “ In 1964, I was a little girl sitting on the linoleum floor of my mother’s house in Milwaukee watching Anne Bancroft present the Oscar for Best Actor at the 36th Academy Awards…”

When Oprah gave thanks she thanked groups such as the Hollywood Foreign Press association and individuals from her past and present. Oprah made it specific and personal: “Dennis Swanson who took a chance on me for A.M. Chicago. Quincy Jones who saw me on that show and said to Steven Spielberg, she’s Sophia in ‘The Colour Purple.’ Gayle who’s been a friend and Stedman who’s been my rock.”   She then extended her gratitude to include all “women who have endured years of abuse and assault because they, like my mother, had children to feed and bills to pay and dreams to pursue.”

Oprah did not shy away from speaking about recent events. She used the stage to speak about the recent passing of 97 year old Recy Taylor, a woman who, in 1944, while walking home from church, was set upon by six armed white men. These men were never prosecuted. “She lived as we all have lived, too many years in a culture broken by brutally powerful men. For too long, women have not been heard or believed if they dare speak the truth to the power of those men. But their time is up. Their time is up.” She then went on to speak about the me too movement and appeal to both men and women to speak up and share their stories.

Oprah is a consummate performer. If 10,000 hours makes an expert then Oprah with over 40 years in front of the media, has achieved expert level.

The Golden Globes speech would not have been an easy presentation to give. Oprah knew this would be an opportunity to speak to a worldwide audience. Oprah delivered her speech with a strong posture, great voice projection and inclusive eye contact. She paused when people applauded and paced her presentation well. She placed emphasis on important words, sped up to create urgency and slowed down for impact. You need to watch the video until the end – she doesn’t hold back!

Oprah at the end of her speech raised her voice to a climactic conclusion reminiscent of Martin Luther King. She used a powerful metaphor and concluded with “So I want all the girls watching here, now, to know that a new day is on the horizon! And when that new day finally dawns, it will be because of a lot of magnificent women, many of whom are right here in this room tonight, and some pretty phenomenal men, fighting hard to make sure that they become the leaders who take us to the time when nobody ever has to say ‘Me too’ again.”

Every presentation is a combination of design and delivery and in this speech Oprah nailed both. This is a speech that will resonate and endure.